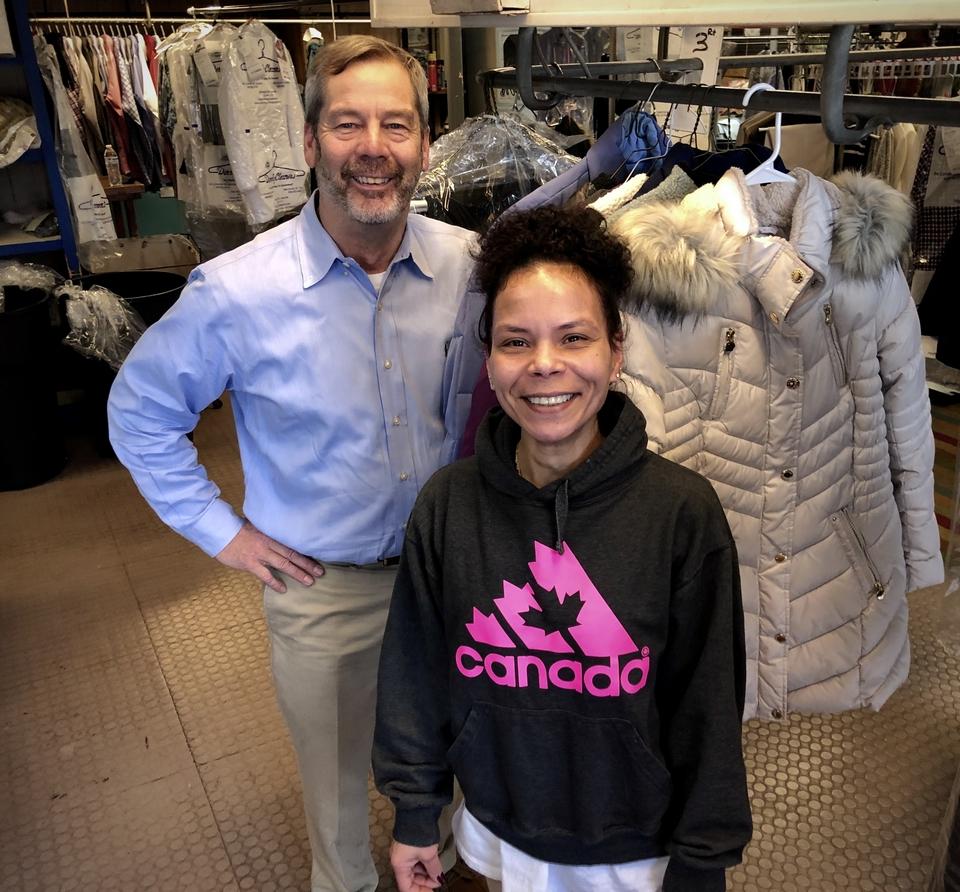 Terry Dermody and employee Aliasha Marchant are seen in front of a rack of used children’s winter coats winter coats that were donated for this year’s Dermody’s Cleaners’Coasts for Kids donation drive.

The owner and operator of Taunton-based Dermody Cleaners estimates he’s collected more than 45,000 winter coats for children donated by customers during the past 27 years.

Dermody says he got the idea for an annual coat drive in 1992, when he read a trade publication about a dry cleaner owner in another part of the country who was collecting and cleaning winter coats for local underprivileged kids.

Each year after Christmas, Dermody makes a concerted effort to spread the word that the deadline for coat donations is Jan. 31.

Dermody, whose late father and uncle started the business in 1957, says he’s been collecting an annual average of 1,400 winter coats in recent years.

The number of coats so far donated this season, he said, is approaching 500.

Dermody’s workers deliver the coats to the St. Vincent de Paul Society Taunton district facility on Washington Street, where each Monday and Friday they are distributed to qualifying adults.

Customers and non-customers alike are welcome to drop off children’s winter coats at any four Dermody Cleaners locations.

All donated coats are professionally cleaned at the central cleaning and customer service facility downtown at 34 Cohannet St.

Coats can also be dropped off at the other Taunton Dermody Cleaners location at Harts Four Corners, as well as in Lakeville’s Sava Plaza at 33 Bedford St.

A fourth drop-off location has been added this year.

He bought the business from original owner Steve Silverman, who has since retired.

“The timing was right for both of us,” Dermody said. “I’ve known Steve for 30 years. We did his shirts before he bought his equipment.”

He said the Press Club name will eventually change to Dermody Cleaners, but not for at least another few months.

Dermody, 62, has previously described a gently worn coat as having a working zipper, no rips or tears and “no repairs needed.”

And he said he’s not about to break his nearly three-decade, coat-donation streak anytime soon.

Retired Berkley resident Ray Jeffrey was back again this year dropping off some winter coats.

Jeffrey, 75, said he and his wife Donna, a retired cardio rehabilitation nurse who died earlier this month, began donating winter coats for kids at Dermody Cleaners shortly after the couple were married 25 years ago.

“I think it’s wonderful,” Jeffrey said Friday, adding that he normally gets some hand-me-down coats from his daughter in Natick.

He said his next stop was the Common Crossing gas station and liquor store in Berkley, where he planned to deposit shoes and stockings into a donation bin.

Dermody Cleaners, through the end of January, is offering a 20-percent-off coupon for any coat cleaning order with a donation either of a used or new children’s winter coat or coats.

The coupon also states that Dermody Cleaners not only will clean the coats but will also repair them if necessary.